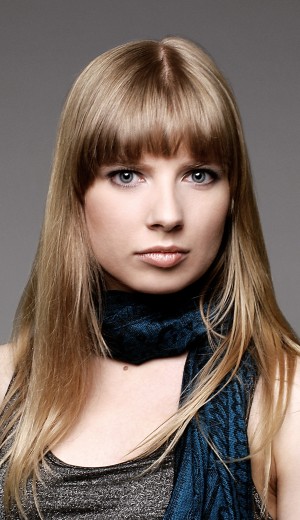 Internationally acclaimed French-Canadian violinist Luanne Homzy is highly sought-after for her technical facility, sensitive musicality and expansive versatility. She has brought home First Prizes in international and national competitions and has performed concerti with orchestras such as the Montréal Symphony Orchestra, the Hamburg Symphony Orchestra and the Colburn Chamber Orchestra. She has served as concertmaster for the Colburn Orchestra, the American Youth Orchestra and the National Youth Orchestra of Canada, and has worked closely with masters such as Sir Neville Mariner, Gustavo Dudamel, James Conlon, Kent Nagano and John Williams.

Festivals Ms. Homzy has performed in and taught at include the Bari International Music Festival in Italy, Ravinia’s Steans Institute, Music By The Sea at Bamfield, The Schleswig-Holstein Music Festival, the Mecklenburg-Vorpommern Festival, and the Domaine Forget Festival. Ms. Homzy has collaborated with musical activists such as Street Symphony —a non-profit run by members of the L.A. Philharmonic and TED members that delivers on-site concerts for greatly underserved members of the community. She has also organized and presented community engagement performances and workshops in the U.S, Canada, Japan and New-Zealand.

As a founding member of the Saguaro Piano Trio —First Prize winner of the International Chamber Music Competition Hamburg in 2009 — she has toured Germany, New Zealand, Australia, the USA, Canada and Japan. She has recorded a full-length album with the Saguaro Trio, live solo recitals and studio sessions for Radio-Canada.

A brilliant improviser and equally at home in many genres, whether it be jazz, classical, gypsy or Eastern European folk music, Ms. Homzy performs world wide with crossover group Trio Dinicu, hailed as “dazzling” by the San Francisco Chronicle. Ms. Homzy composes and arranges classical, jazz, popular and world music for diverse ensembles. Recent premieres include her arrangement of “Caprice No. 24 With A Swing” premiered in Italy in June 2012, and her arrangement of “Honeysuckle Rose” by Fats Waller, premiered in Canada in July 2013, bothaudience favorites.

Ms. Homzy is based in Los Angeles. She studied with Robert Lipsett on a full scholarship at the prestigious Colburn Conservatory in Los Angeles and later obtained her Masters from the Hamburg Hochschule in Germany.