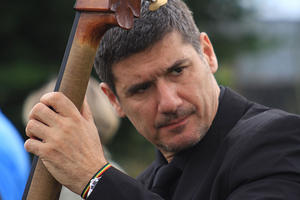 Legendary bassist Frank Anastasio is a musician of exceptional soul and artistry. His first guitar teachers were his father Pierre Anastasio, the luthier, and many Montreuil area gypsy guitarists. In 1980, he met guitarist Laurent Bajata who introduced him in 1984 to Serge Camps who had just opened the cabaret “la Roue Fleurie” a famous meeting place of the manouche and gypsy musicians of Paris. Frank played the double bass at the cabaret for over five years with Laurent Bajata, Serge Camps, Pierre Camps, Raphael Faÿs and Angelo Debarre. It is during that period that the “Gypsy Guitars” album (Hot Club Records) with Serge Camps and Angelo Debarre was recorded. Since then this quintessential album has been widely regarded as one of the greatest jazz manouche recordings of all time. Frank has played in various Parisian cabarets, and notably with Boulou & Elios Ferré, Florin Niculescu, Marc de Loutchek, Petro Ivanovitch, and the Arbat Trio. He recorded two albums with Arbat : “Chantez Tziganes” (Hot Club Records) and "Ilô" (Buda Musique). During the same period, he also accompanied the great singer Ivan Rebroff. Since 1995, he has been an acoustic and electric bassist, guitarist and singer in the band “Les Yeux Noirs”, with which he has toured worldwide – and recorded 6 albums : Izvoara, Balamouk et Live (EMI), Tchorba (Recall-Sony) and Tiganeasca (Zig-Zag- Harmonia Mundi). In 2012 Frank became the bassist for Opus 4.