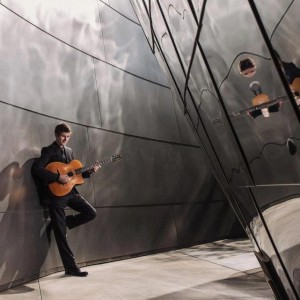 Whether it’s French waltzes, poignant interpretations of gypsy folk music or the swinging standards of the Hot Club of France, guitarist Tommy demonstrates technical mastery, compositional creativity and sensitivity beyond his years.

At just 25 years of age, he has toured nationally with David Grisman, Stephane Wrembel, Angelo Debarre and Robin Nolan, and has performed internationally with the greatest masters of the Gypsy Jazz Genre, such as Opus 4, Florin Niculescu, Tcha Limberger, Lolo Meier and Andreas Oberg. His vast repertoire also includes Romanian, Hungarian Yugoslavian and Russian traditional folk music. He is one of the rare few who can deftly navigate this language uncommon to the guitar. Tommy Davy and his ensemble have been featured at Djangofest Northwest, Djangofest LA, Djangofest San Francisco, Djangofest Colorado, Music By The Sea at Bamfield and NY Birdland’s Django Reinhardt Festival Tour.

Tommy first studied guitar under the guidance of Larry Koonse and Macedonian guitarist Miroslav Tadic also, directly studing with the gypsy masters such as Angelo Debarre and Serge Camps has given him a truly multi focused approach. He carries on this authentic style of playing in such a way which critics have regarded as "... jewels of gypsy music played with great poise and authenticity... magic is happening." - Claude Laurin, Radio Centre Ville. His devotion to his music has taken him to far away destinations such as Japan, Germany, and France, as well as across the USA and Canada.

Dedicated to musical outreach, especially in working to combine genres to draw in those who might be less familiar with jazz and classical music, Tommy has performed for many underprivileged audiences through Street Symphony, a non-profit organization affiliated to the Los Angeles Philharmonic. He also teaches and presents workshops of jazz manouche technique and practice.